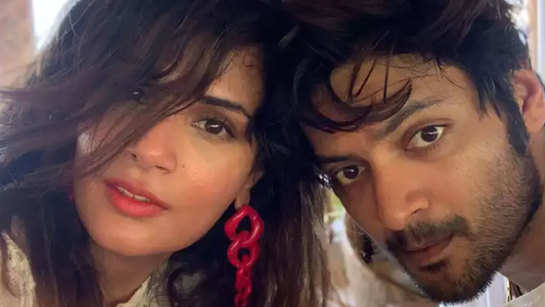 
Theirs was one of the most anticipated weddings in showbiz, but fate had other plans. Ali Fazal and Richa Chadha, who were to tie the knot earlier this year, had to postpone their wedding plans thanks to the COVID-19 pandemic. Both stars said that while they were disappointed about postponing their nuptials, they had taken things in their stride.

Recently, there were reports that Ali and Richa are all set to fly to Egypt soon. Ali has been roped in as one of the judges at the Shorts Film Competition Festival and Richa will accompany him there.

Richa, herself, will be a part of an interesting panel discussion on women empowerment. In an interview, Richa said that she was looking forward to the trip as well as participating in the discussion. She said the aim would be to focus on gender equality, which would come from empowering women. Other than that, the actress will also talk about her Bollywood journey.

Ali added that the fact that things were restarting slowly, meant that the worst part was probably behind us. He said he was excited to meet other jury members and watching engaging short films at the event. The actor said that people should learn from the events of the past several months. On the work front, Ali has Kenneth Branagh’s ‘Death On The Nile’ in his kitty.

Previous ArticleCardi B confirms she back with Offset a month after filing for divorce – Times of India
Next Article5 years of ‘Pyaar Ka Punchnama 2’: Reasons to revisit the much-loved comedy film – Times of India