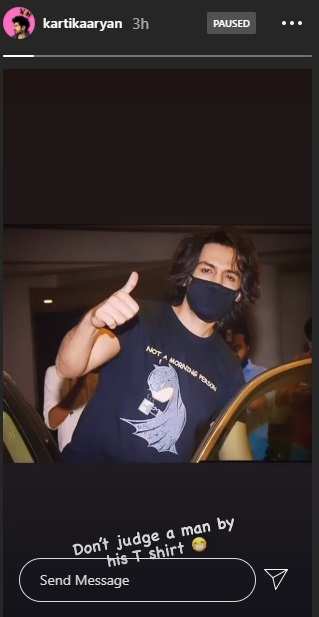 Kartik Aaryan shares a picture of himself on Instagram; captions, ‘Don’t judge a man by his t-shirt’ – Times of India

Kartik Aaryan is quite active on social media and keeps fans updated about his day-to-day activities. Now, he took to Instagram to share a picture of himself posing for the camera. He can be seen wearing a t-shirt with ‘Not A Morning Person’ written on it. The actor was also sporting a face mask as a COVID-19 precaution.

However, Kartik doesn’t want you to make any conclusions by reading the caption on his tee. As, along with the picture, Kartik wrote, “Don’t judge a man by his t-shirt”

On the work front, the actor will next star in Anees Bazmee‘s ‘Bhool Bhulaiyaa 2‘ co-starring Kiara Advani. Recently, the director stated that the film team will shoot a few scenes in Mumbai soon and then head to Lucknow.

Kartik will also feature in ‘Dostana 2’ with Janhvi Kapoor and Lakshya. He was last seen in Imtiaz Ali‘s ‘Love Aaj Kal’ with Sara Ali Khan. The film was released in February this year.

Previous ArticleSussanne Khan reveals her Instagram account was hacked; asks everyone to “stay safe from the viral thieves and bandits” – Times of India
Next ArticleVarun Dhawan treats himself with a “gluten free bread” while vacationing in the Maldives! – Times of India